I get that how one defines ‘larger family’ can be subjective. For me personally, it’s any family who has at least one kid more than I have (and on a bad day, it’s any number of kids greater than zero).

However you define it, here are some things you should avoid saying to people with lots of children.

What about the environment?

What about the extra oxygen you’ve thieved by simply asking that question?

Are you pregnant right now?

How dare you assume that I’m perpetually pregnant?

And also, I’m never wearing this peplum top ever again.

Are you [insert religion]?

The topic of religion is normally a social no-no, so why do you think it’s acceptable to bring it up in this context?

How can you afford them all?

Easily, if I feed them every second day.

You must enjoy all the tax breaks.

Well there’s your answer to the previous question (I say non-non-sarcastically). 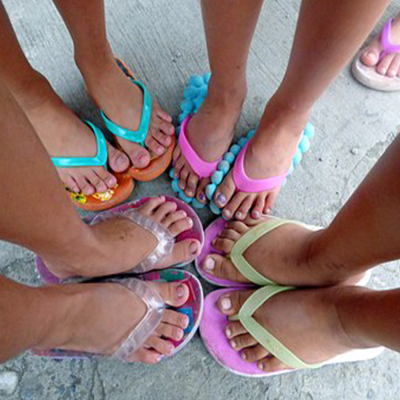 Do they all have the same parents?

Well, yes, I think so. Though I have been known to snatch other people’s kids or go trawling the streets for new men on the nights my husband is too tired for procreation.

Have you heard of contraception?

You mean like, don’t have sex on days with fewer than five letters? Or don’t hold hands immediately after sex?

Honourable mentions: You should keep your legs closed, learn to say no to your husband.

They must be fun to make!

Or any other creepy comment alluding to our sex lives.

The assumption that we must be having lots of sex is a bit odd considering that most adults have had sex more times than the number of children we have.

Your lady passage must be huge.

You’re right. The last few babies fell out when I sneezed.

Are you trying to get your own reality show?

Yes! I figured out I can’t sing or dance, and I can’t afford bum implants, so this is the next best thing.

Were they all planned?

You’ve got yourself a football team!

Great. Now pay them $1 million each.

The whole football team thing gets a bit tired, so please stop saying it. However, if you absolutely cannot resist the urge to make such a comment, why not mix it up a bit? After all, not everyone likes football. Try instead:

You’ve got yourself a ballet troupe!

You’ve got yourself a sweet money laundering unit!

Must be nice to have little helpers.

Have you met any children lately? If not, then you should know that they’re as helpful as shovelling snow during a blizzard.